The Palm House was designed to showcase the wonders of the natural world, to amaze visitors with the discoveries of intrepid Victorian explorers and to educate people about the value of plants.

The original 1896 planting scheme included specimens from five different continents – South East Asia, Australasia, the Americas, Africa, Europe and the Mediterranean. They were chosen not only for their beauty and scent, but also because they were useful for medicines, fibres, gums, food and dyes.

Some of the plants growing here today are part of the historic Liverpool Botanical Collection, one of the oldest in Britain. It was founded in 1802 by William Roscoe with the aim of furthering scientific knowledge and discovering plants that could benefit Britain’s developing industries and population. Roscoe had over 4,000 plants shipped to Liverpool’s docks by Victorian plant hunters.

Today the Palm House still showcases plants from around the world and even includes some of the original specimens. We look after 20 varieties of palms and 23 types of orchid. Growing here you will find 35 species of food plant and dotted jewel-like amongst the foliage is a magnificent collection of weird and wonderful bromeliads.

A visit to the Palm House is a true sensory experience with a myriad of colours, scents, shapes and textures. It is also food for thought – you can walk amongst plants that are endangered, threatened with extinction or indeed already extinct within their native habitats.

These tall palms are native of coastal areas of southern USA, Cuba and the Bahamas and are named after the cabbage-like terminal bud, which was traditionally eaten as 'heart of palm salad'. The bristles from the tough, salt-tolerant leaves can be made into scrubbing brushes. 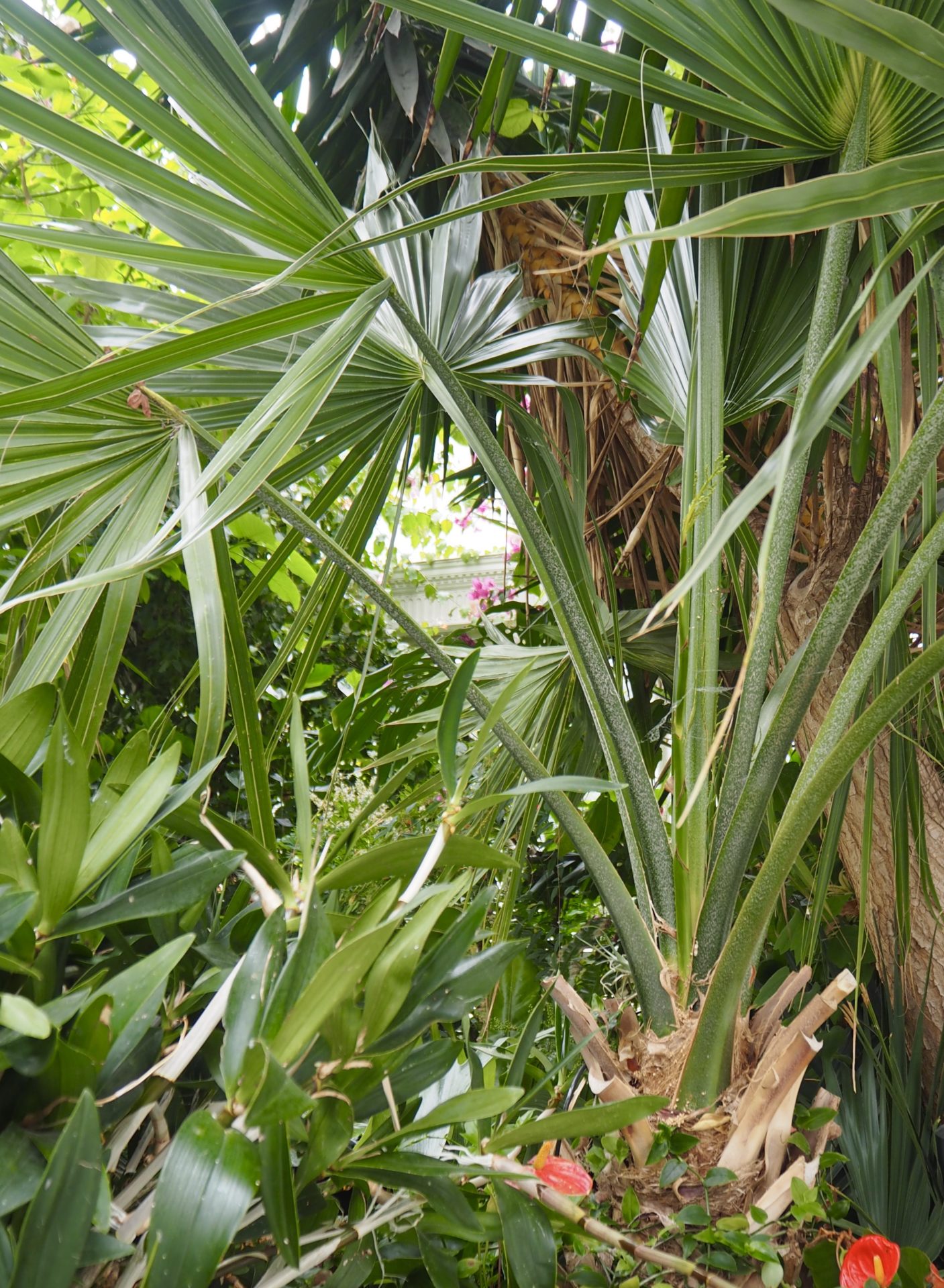 This is one of the hardiest palms, able to grow at higher altitudes than other species in central China, southern Japan, northern India and Myanmar. The old leaf sheaths are very fibrous and used to make rope and sacks. 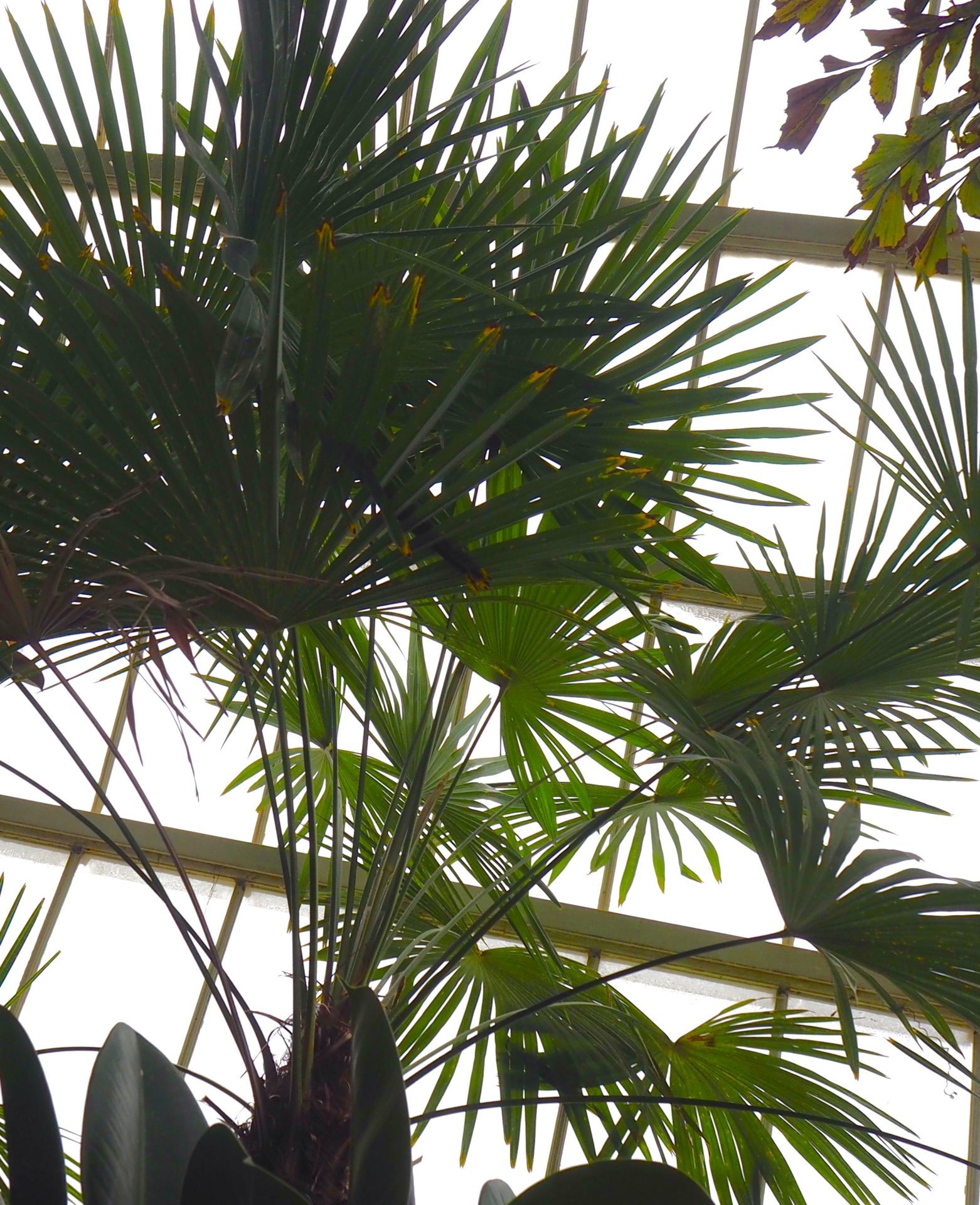 The elegant broadleaf lady palm, or bamboo palm, is believed to have originated in southern China and Taiwan, but is no longer found in the wild. It is a popular plant for houses and offices as it can tolerate shade. 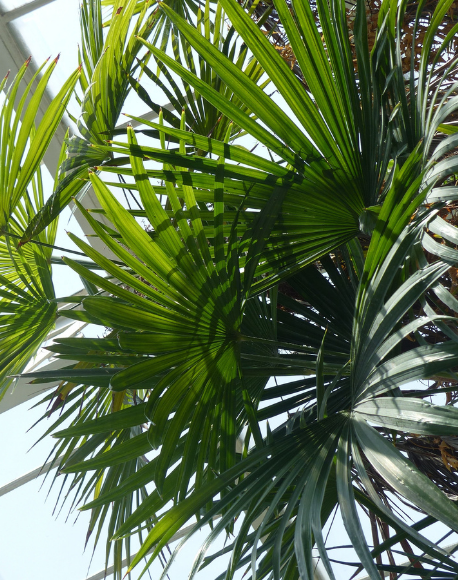 Also known as the California palm or petticoat palm, this native of the south western USA grows in desert oases. The leaves were used by native American tribes to make baskets and sandals and to thatch roofs. 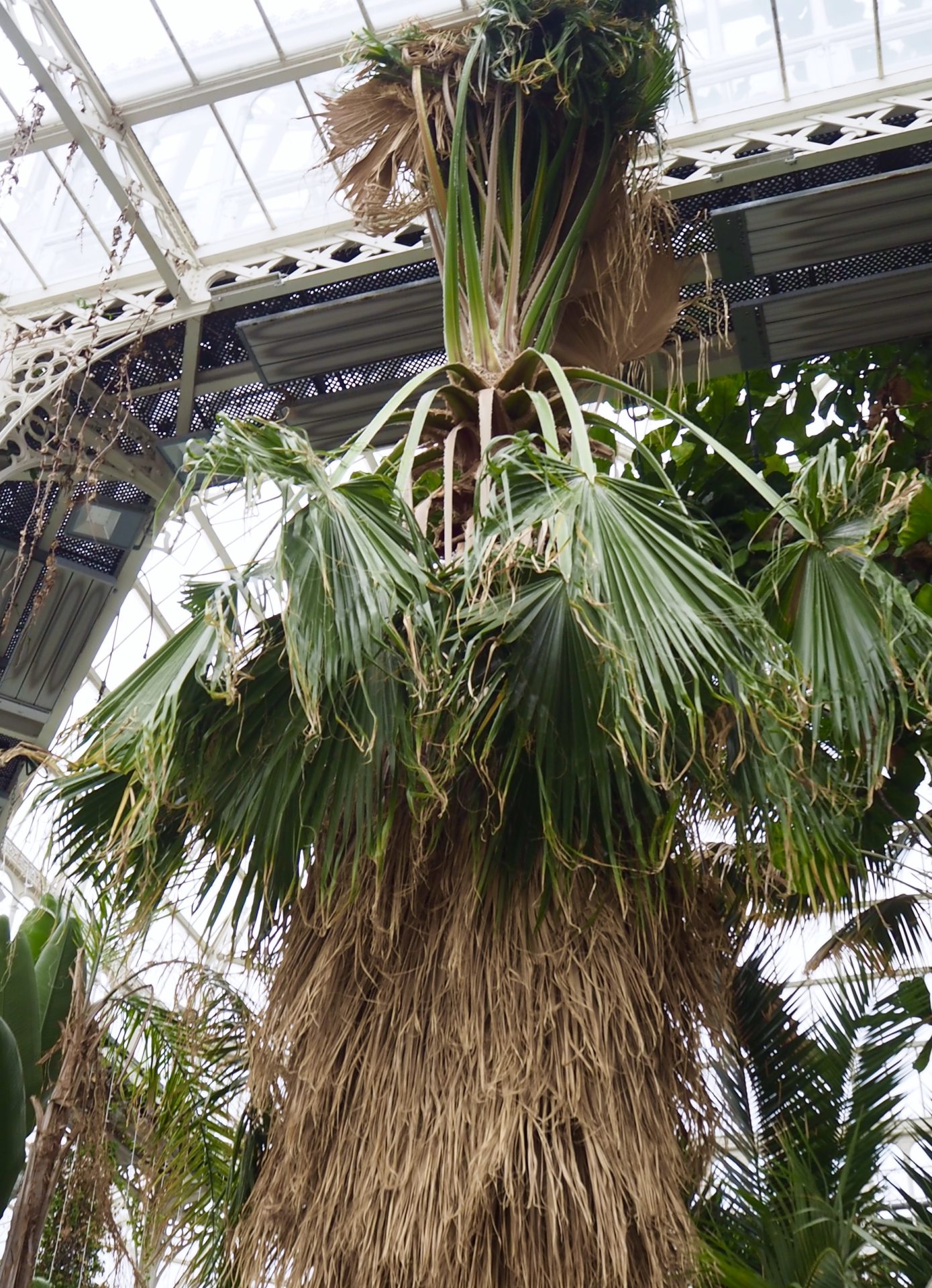 This specimen is a true survivor. It is one of the original Palm House plants and has grown here for over 120 years, surviving a Second World War bomb blast and winters without glass in the 1980s and 1990s. 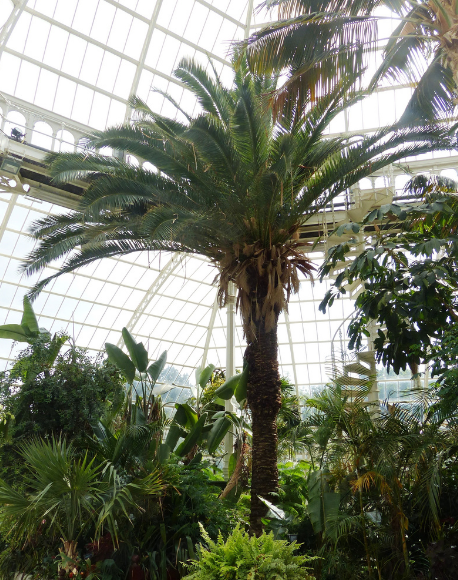 The distinctive fan-shaped leaves of the cabbage-tree palm were used by early European settlers in Australia to make plaited 'cabbage tree hats' as protection from the sun. 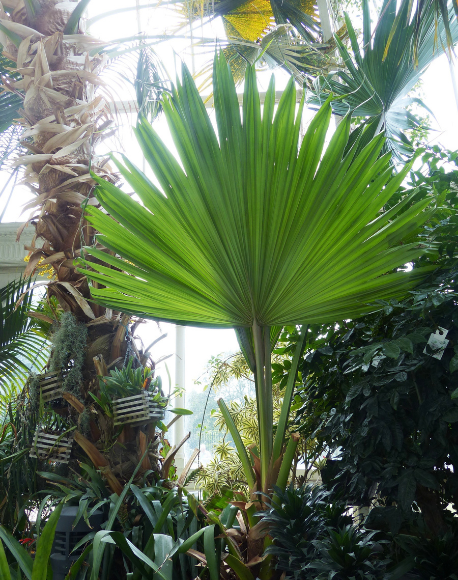 These tall, straight-stemmed trees were noted by Captain James Cook in 1774 when he sighted Norfolk Island, between New Zealand and New Caledonia, on his second voyage to the South Pacific. He made a note to find out if they would make good ship's masts - apparently they didn't! 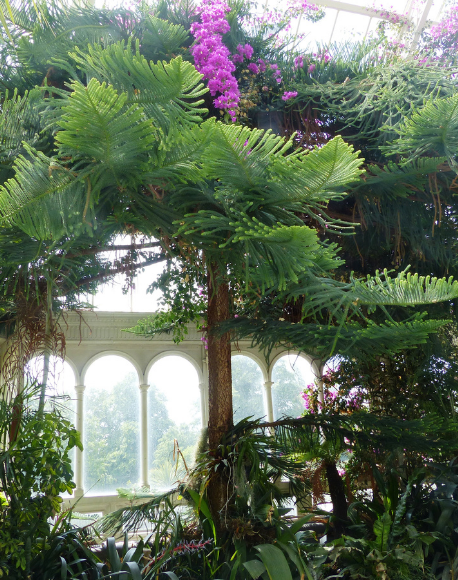 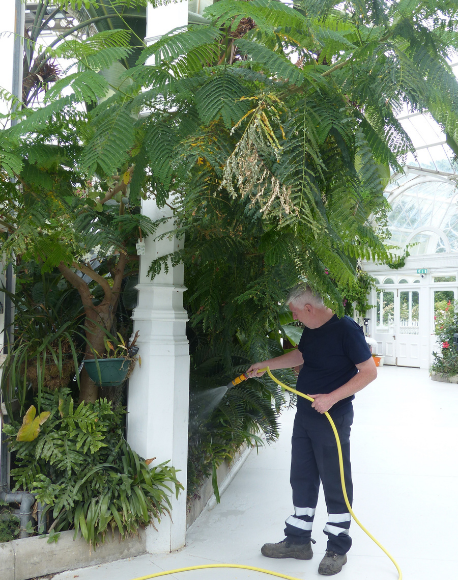 Watering, weeding, pruning and planting – there’s no rest for the Palm House gardener! 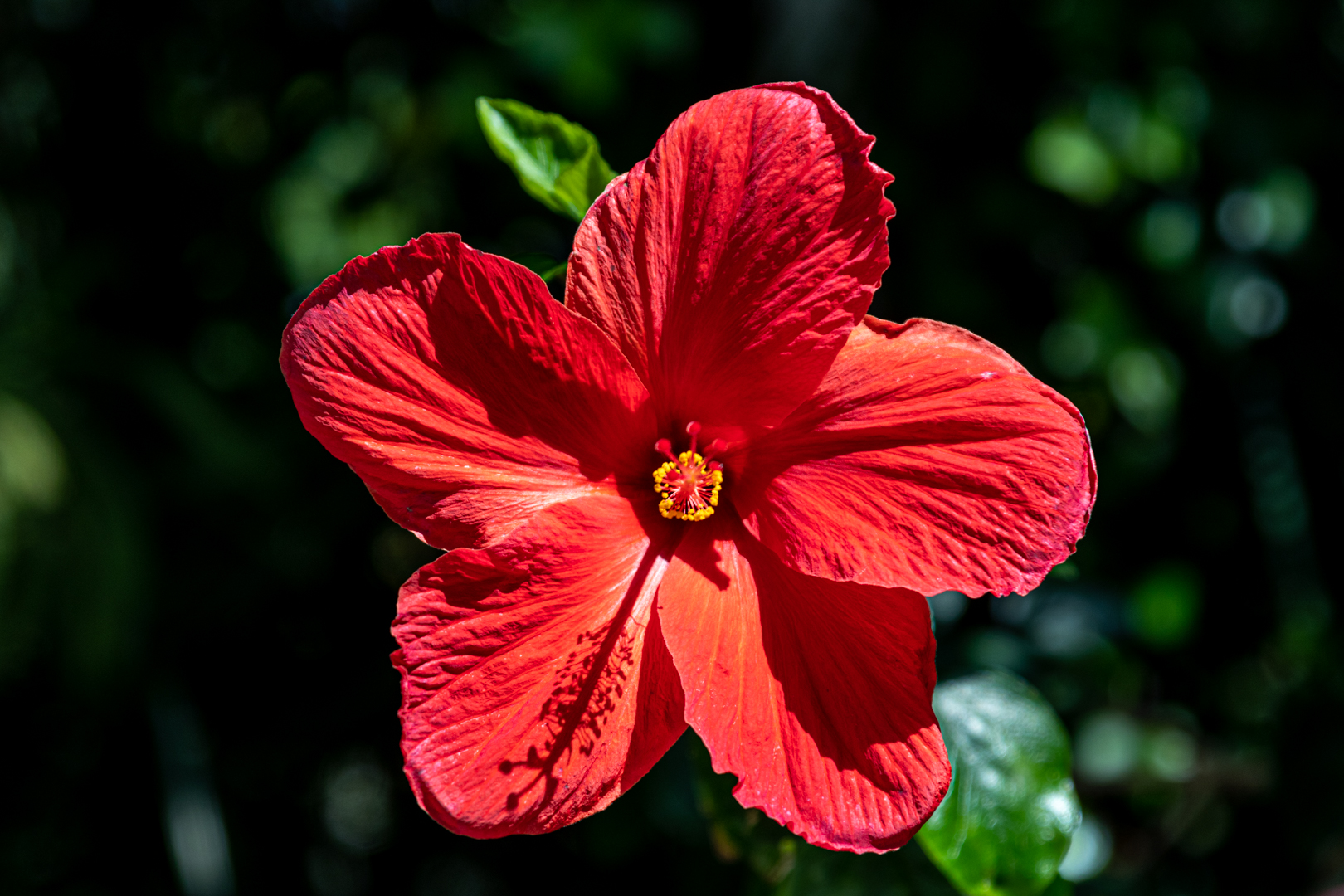 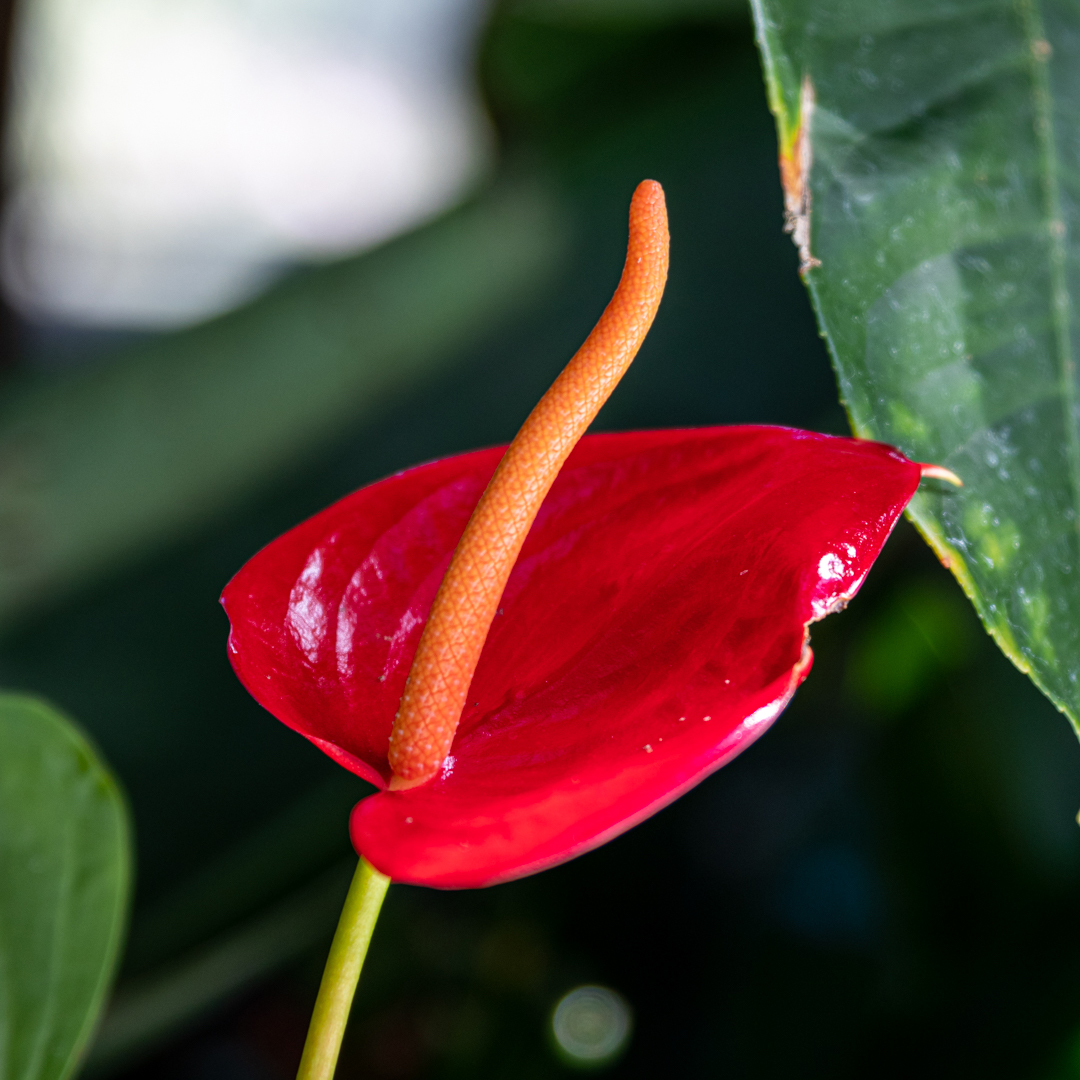 Gardening can be thirsty work

If you have house plants at home, try giving them rainwater instead of tap water – if you live in a hard water area, your plants may thank you for a fresh drop of rain.

As some of the plants growing here are natives of tropical or humid climates, maintaining a moist atmosphere for both their roots and leaves is important to keep them healthy. However other plants in the Palm House prefer drier conditions, so watering by hand and hosepipe helps to keep everyone happy. The daily round of watering includes a refreshing spritz for some while others are left dry.

Without a mains water supply, the Victorian designers of the Palm House had to be water-wise. Rainwater hitting the glass domes flowed down through the hollow iron supporting pillars into collecting tanks in the basement. Sadly the rainwater tanks have long gone and today we have to use mains water. 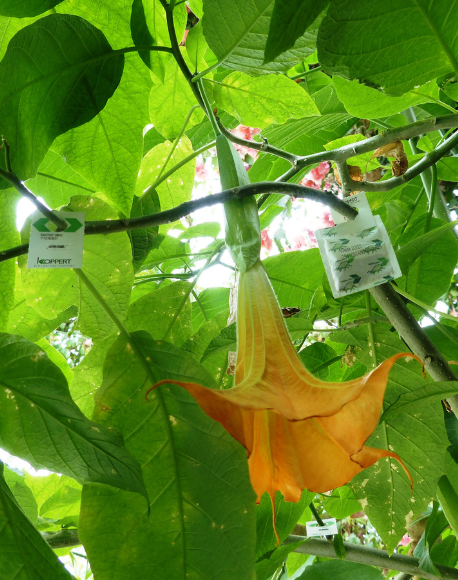 The battle of the bugs

While the warm shelter of the Palm House is ideal for our plants to grow, it’s also a cosy place for insects to thrive and some are definitely more welcome than others.

Sap sucking aphids, mealybugs and weevils can seriously damage the health of our plants, but thankfully we have nature on hand to help. We use a variety of biological controls to keep things in check. Beneficial insects are introduced into the foliage to feed on sap sucking pests. We also water nematodes into the soil to kill off any unwanted pests, such as vine weevil larvae, which feed on roots.

If you see little packets and cards hanging amongst the foliage, it isn’t unsightly litter. Inside are the eggs of our insect helpers which will emerge to become our pest control team. 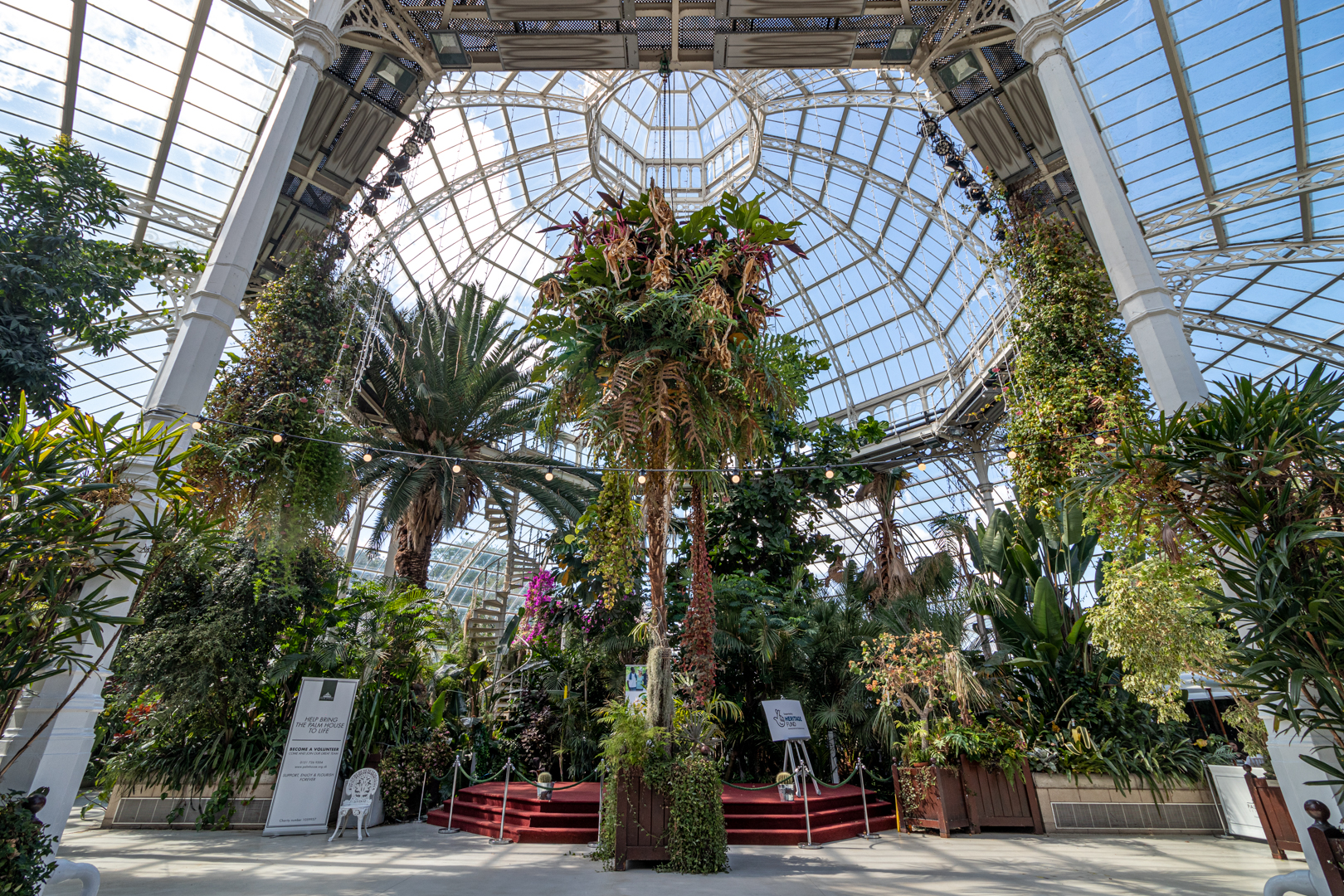 The Exotic World of Plants brochure gives details of the different plants contained within the building. With Plants from all