There is a new documentary coming to #skyarts this October following a group of artists as they redress statues within Liverpool. The Palm House has four statues featured in the documentary and is hosting three installations by the artist and fashion designer, Taya Hughes @abouttayamika that you can now view within the grounds. 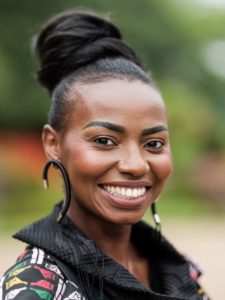 Taya Hughes has dressed the statues of Christopher Columbus, Captain Cook and Henry The Navigator in elaborate Elizabethan-style ruffs made from fabrics associated with indigenous populations in Africa, New Zealand and Australia. The ruffs present a unique opportunity for us to redress and discuss these explorers, who claimed to ‘discover’ these parts of the world. 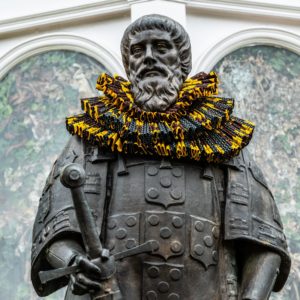 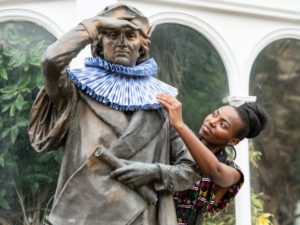 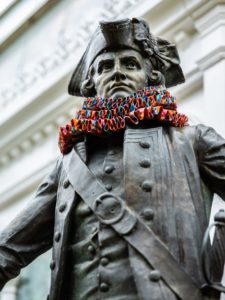 Also featuring in the documentary is a picnic for the fairy’s and woodland creatures that surround Peter Pan. Erected in 1928, it is a copy of the statue in Kensington Gardens in London and is one of six others around the world. The picnic and storey telling was conceived by Denise Wright and costumes designed and created by Mary Lamb.

Looking at how we interpret our sculptures is a feature of our National Lottery Heritage Fund grant. As well as helping to share the information about the sculpture’s age, materials and maker’s information, we hope to engage people in a discussion about how we should respond to statues that where built to honour individuals that we now see in a different light.

With thanks to lottery players we can now update our signage with information that is sensitive to our audience and invites people to think more critically about the environment around them.

The creations by the team of artists behind Statues Redressed has been the perfect way to start these conversations and we would love to hear what thoughts you have had while seeing our navigators redressed.

“Some of the artists’ interventions across the city range from the celebratory to the confrontational, and all will be thought-provoking. As each statue is gradually revealed to the public, spectators will be prompted to look again, think again, and question how we feel about the public art that surrounds us.“

We are so excited to be hosting the work of Taya Hughes this summer which you can still see within the grounds and as the Artist Bob and Roberta Smith’s banner, that is placed underneath Jacob Epstein’s Liverpool resurgent sculpture, boldly states “We will get through this with art”